In my previous blog post about my shed I teased about a wireless access point, and that it would be the subject of a future blog post. I had intended that to be the next enhancement to my shed that I blogged about. Unfortunately having had a shed for a few weeks now, and stuff that needs somewhere to live (the point of buying the shed in the first place), my wife insisted that the shed should be used for storage. It’s not like I didn’t want this as well, so I have had to re-prioritise my sub-projects within the shed. So once again that will have to wait. This week I have built a set of two shelves.

So I haven’t taken many pictures this time. There may also have been a certain amount of swearing involved in the construction of these shelves. So being the intelligent, self sufficient, practical chap that I am* I decided that rather than buying shelves pre made I would be able to construct some shelves out of wood that are bespoke to my shed. Similar to the bike rack I’ve used wooden beams that are the same size as the structure of the shed, I have also used 15mm chip board for the shelves themselves. How hard could it be?

Well it turns out that was probably a mistake. Hence the possibility of swearing being involved. I started by measuring where I wanted the shelves to go. I wanted the supports to be resting on structural members of the shed, and as one of the upright supports of the back of the shed lined up with one of the structural members under the floor I used that rather than having to cut too many uprights. I also used the very back corner as one of the uprights. I then cut two new uprights, one that rested at the back of the shed, and one that stood out next to where my bike was hanging. I joined these all together with two levels of the cross members. I may have done this in the wrong order. And the decision not to attach the new uprights to the floor where they stood was certainly a bad choice. Once again I have used corner braces to support the weight. This gave me a frame on which I could build my shelves. 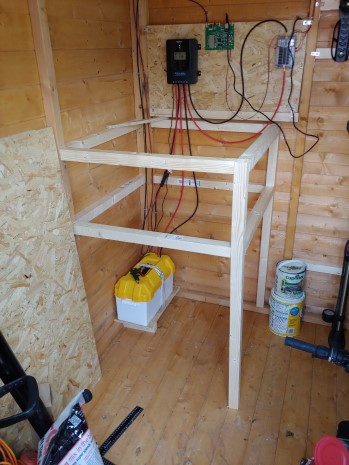 This frame is reasonably sturdy, but as I built the bit closest the camera in that shot first the rest of it involved quite a lot of swearing. And the corner braces I used are slightly less than 90 degrees, they pull out to 90 degrees easily enough when you screw them in, if what you’re screwing them into is suitably supported. This meant I was constantly battling the position of the uprights as I attached the first cross members to them. However once I got it all set up it was sturdy enough to support my weight, so I’m confident I won’t have any trouble with it. Onto this frame I put some 15 mm chip board. Alas the chip board I bought wasn’t big enough to fully cover the frame, so I do need to get some more and cut it to fill a gap at the back of the shelving. But as it stands it has plenty of room, and doesn’t look too bad if I say so myself. 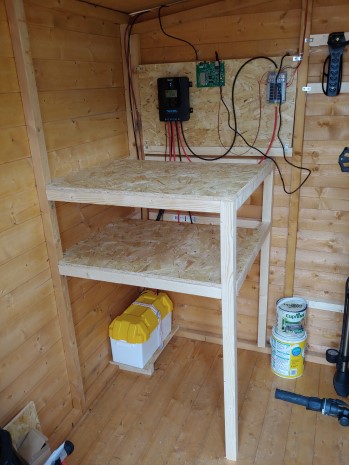 I’ve already started to use the shelves, so I may or may not get around to filling the gap at the back. But as I’m going to have to cut channels in the bard for the wires for the solar charger and battery that was more complex than the cuts I needed to make for the boards where they are now. But the Shed is now in use for storage of more than just our bikes, so my wife is reasonably happy.